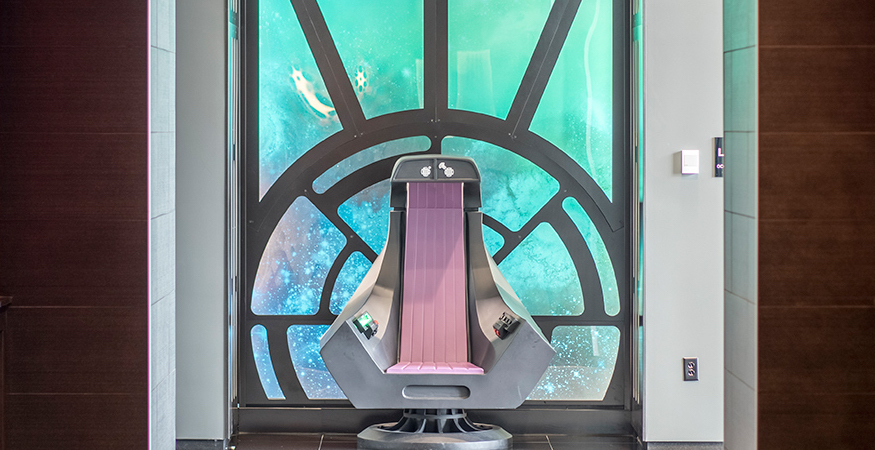 So when the new Alamo Drafthouse Cinema opened in west Omaha, we decided it would be the perfect venue for an after-work team outing—not to mention they scheduled a showing of the C3D team’s favorite Christmas movie, Die Hard.

You may have noticed the theatre is making national headlines for its massive, Star Wars-themed display. As soon as you walk inside, it’s quite clear what Omaha movie goers and entertainment critics are so excited about.

Here’s what some members of the C3D team have to say about our recent experience at Omaha’s new Alamo Drafthouse Cinema:

Had a terrific time at the Alamo. The bar/restaurant was a great place to hang out before the movie and the restaurant service concept inside the theatre is novel.

I just had snacks but the entrees coming from the kitchen looked tasty. Having a themed vintage movie night is original and a lot of fun if you’re with a group of friends. Only criticism would be that the lights in the restaurant/bar are too bright.

Our office started a tradition a few years ago where we’d play Christmas movies in the background during the month of December. Last year we started with Die Hard; this year we continued the tradition but in an actual theater.

I just got back from being in LA for awhile and while LA has some amazing theaters, the Alamo Drafthouse chain may win my vote for favorite theater concept. Their specialty is creating experiences for movie lovers.

The showing of Die Hard was filled with people who love Die Hard. Which is a similar energy to going to a midnight movie with all the superfans, but you aren’t as sleepy the next day.

The food is good. High quality. Chocolate chip cookie gets an A+. My only disappointment is that the servers come back with the checks with about 45 minutes left of the movie. They do a good job of being discreet, but it is still a bit distracting.

Make sure you sit in the Emperor’s chair – you can’t leave without firing the Death Star’s laser at least once. (Video c/o Dimensional Innovations)

The Alamo makes a real effort at improving the overall moviegoing experience for its fans.

From the Alamo website: “We have zero tolerance for talking or cell phone use of any kind during movies, and we aren’t afraid to kick anyone rude enough to start texting their friends during a show right out of the theater.”

So don’t let the availability of local beer and mixed drinks give you the impression that the theatre becomes a party once you reach your seat; interruptions won’t be an issue.

The theatre boasts “the best film, food and drink all in one seat” and certainly delivers with not only an extensive food and drink menu, but also a full restaurant attached to the lobby.

Zero interruptions or need to get up while the movie was playing. The waiter explained everything perfectly before the show and we were greeted by an actual person as an introduction to the movie. Love that they play both old school and new movies—this was my first time seeing Die Hard. Definitely going back soon!

What impressed me most about our trip to the Alamo Drafthouse was how everything about the brand was focused on one thing: a love of movies.

You could really feel the difference with the pre-show entertainment: instead of a endless string of advertisments or thinly-veiled branded content, the Alamo showed a string of clips and mashups put together specifically to go with the feature we were there to see.

There weren’t any ads for soft drinks, or music videos from ‘featured artists’ or pseudo-advertising trivia questions. Just fun clips. The kind you would share with a friend if you heard they were going see that movie (Die-Hard, in our case.)

I felt less like a consumer and more like a movie-fan in a room full of movie fans, and in a business run by movie fans.

So good you won’t feel bad for blowing up Alderaan.

In the few short weeks since the Alamo Drafthouse has been open, I’ve managed to accrue enough visits to move up a rank in their Victory Reward Program. The highlights of my visits have been the food selection, drink menu, seat comfort and the convenience.

One might think the ninja-like servers would get in the way, but all-told they provide for a great movie experience. Alamo Drafthouse is the place for those people who care about the movie-going experience.

Want to learn more about our involvement in Omaha? Subscribe to our C3D newsletter to keep up with the team’s latest work, meet our clients, and more!